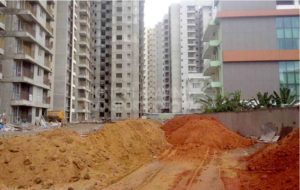 Vignesh Aravind Transport is a growing soil suppliers in Chennai. The reason why red soil is preferred for gardening and horticulture is the drainage. Some of the major crops of India including groundnut, millet, ragi, rice, potato, sugarcane, wheat and tobacco are grown in red soil.

Vignesh Aravind Transports based out of Chennai has an incredible offer going on where one can get a unit of Red soil free when they buy 5 loads of red soil.

Red soil is one of the best types of soil we can find in our country. Especially in states such as Tamil Nadu, southern Karnataka, north-eastern Andhra Pradesh and some parts of Madhya Pradesh, Chhattisgarh, and Odisha. Red soil is formed by combining rock material and mountains. Hence red soil is mainly found in the mountain regions. The red colour is due to the high iron content. As they are found in less rainfall region, the soil turns red in colour due to sun. best soil suppliers chennai.

How to identify your soil type?

When you pour water onto your soil and drains quickly. It is most likely to be sandy or gravelly soil as with clay soil the water will take longer to sink in. [ Best Soil and Sand Suppliers Chennai VAT ]

Grab some soil and press it. If it is sticky and retains the shape when you let go, it is clay soil. If the soil is spongy, it is peaty soil. Sandy soil will fall apart easily. Loamy soil will have a very smooth texture but will retain the shape for a small period of time.

Add soil to a transparent container, add water, shake well and then leave to settle for 12 hours.

The pH for soils usually ranges between 4.0 and 8.5. Plants favor soil which has a pH between 6.5 and 7 because this is the level where nutrients and minerals naturally thrive. As a general rule, in areas with soft water you will have acid soil and hard water areas will tend to have alkaline soil.

Use a soil test kit to assess primary nutrients (N-P-K) as well as pH levels. By testing your soil, you determine its exact condition so you can fertilize more effectively and economically. Soil should be tested periodically throughout the growing season.

Vignesh Aravind Transports sells garden soil that’ generally pre-mixed soil products that are intended to be added to the existing soil in a garden or flower bed. What’s in garden soil usually depends on what they are intended to have grown in them.

How Garden Soil Or Red Soil Is Harvested?

Garden soil is harvested from the first foot or two of the earth, then shredded and screened to remove stones or other large particles. Once it has been processed to have a fine, loose consistency, it is packaged or sold in bulk. Depending on where this garden soil was harvested, it may contain sand, clay, silt, or regional minerals. Even after being processed, garden soil can be too dense and heavy, and lacking in nutrients for proper root development of young or small plants.

Since straight garden soil isn’t the best option for gardens, flowerbeds, or containers, many companies which specialize in gardening products create mixes of garden soil and other materials for specific planting purposes.

This is why you may find bags labelled as Garden Soil for Trees and Shrubs or Garden Soil for Vegetable Gardens. These products consist of garden soil and a mixture of other materials and nutrients which will help the specific plants they are designed for to develop to their full potential.

Garden soils are still heavy and dense because of the garden soil they contain, so it is not recommended to use garden soil in containers or pots, as they can retain too much water, do not allow for the proper oxygen exchange and ultimately suffocate container plant.

Why we are no. 1 Garden Soil Suppliers In Chennai?

At the start of the gardening season, garden centers, landscape suppliers and even big box stores haul in pallet after pallet of bagged soils and potting mixes. Vignesh Aravind Transports is the best Garden Soil Suppliers in Chennai. As you browse these bagged products with labels that say such things as: Garden soil, Garden Soil for Vegetable Gardens, Garden Soil for Flowerbeds, Soilless Potting Mix or Professional Potting Mix.

Why Red Soil Or Garden Soil Is Best For Gardens?

This garden soil, enriched with compost and other organic matter so it’s nutritious for plants. It has a heavier texture and holds water longer than potting mixes. Use it when you’re planting or maintaining flower beds. Vignesh Aravind Transports is the best Red Soil Suppliers in Chennai. Garden soil is the cheapest way to enrich the soil in gardens and flower beds.

Mixture of garden soil, be careful of adding too much peat moss, which can increase the acidity of the soil and throw off the pH balance. Some gardeners prefer to fill raised garden beds with a topsoil-free mix, using equal parts compost, perlite, and coco coir. It makes for a fluffy, moisture-retaining growing medium.

The best soil for most plants to ensure optimum growth is a rich, sandy loam. This soil is an even mixture of all three main types of soil. In most cases, you’ll need to amend the soil with compost. Depending on how compact the soil is, you may need to add peat moss and sand.

The topsoil, enriched with compost and other organic matter so it’s nutritious for plants. It has a heavier texture and holds water longer than potting mixes. Use it when you’re planting or maintaining flower beds. Garden soil is the cheapest way to enrich the soil in gardens and flower beds. Garden soil is meant to be spread around. Mix garden soil in with your native dirt to improve it. Its organic components break down over time, to enrich and improve the native dirt it’s mixed with. Use it for planting flowers, bushes, trees and even fruits and vegetables in your garden.