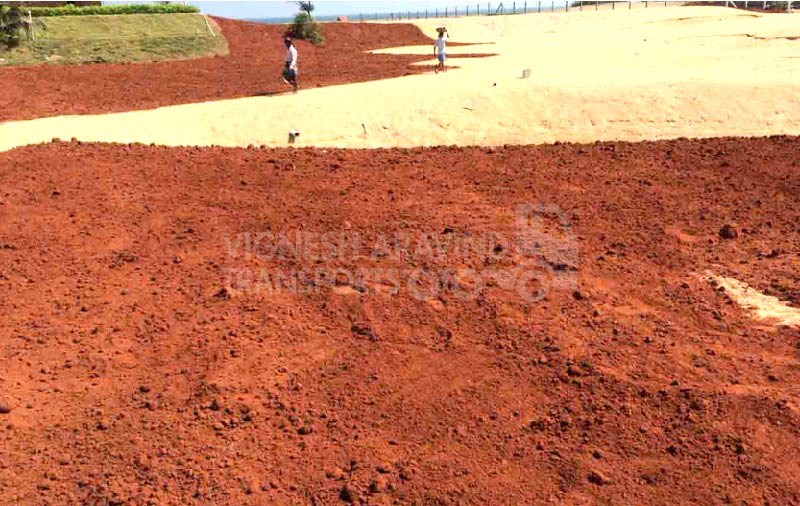 Why Vignesh Aravind Transports? All the above-mentioned products are of 100% best in quality. Bulk loads are undertaken for cheaper price. Provide free samples at your doorstep. On Time delivery service. 24/7 Support. Guaranteed Material Quantity. We are a leading Manufacturer of red soil and red soil supplier in Chennai from Chennai, India.

Red soil with a loamy texture is great for gardening because they are easy to till and promote airflow. You will typically see topsoil sold in larger quantities than gardening soil, and it is also more of an “all-purpose” soil as well.

What Is Red Soil ?

Red soil is the best part of the Indian earth’s land on which we can see physically in our surround of the state like in the Tamil Nadu, southern Karnataka, north-eastern Andhra Pradesh and some parts of Madhya Pradesh, Chhattisgarh, and Odisha. It is the combination of the rock material and the ignitions part of the rocks and the mountain. Red Soil Dealers In Chennai

Vignesh Aravind Transport is a growing Red Sand Dealers in Chennai. The reason why red soil is preferred for gardening and horticulture is the drainage. Some major crops of India including groundnut, millet, ragi, rice, potato, sugarcane, wheat and tobacco are grown in red soil.

Vignesh Aravind Transports based out of Chennai has an incredible offer going on where one can get a unit of red soil free when they buy 5 loads of red soil.

Vignesh Aravind Transports sells garden soil that’ generally pre-mixed soil products that are intended to be added to the existing soil in a garden or flower bed. What’s in garden soil usually depends on what they are intended to have grown in them.

Red soil is harvested from the first foot or two of the earth, then shredded and screened to remove stones or other large particles. Once it has been processed to have a fine, loose consistency, it is packaged or sold in bulk. Depending on where this red soil was harvested, it may contain sand, clay, silt, or regional minerals. Even after being processed, garden soil can be too dense and heavy, and lacking in nutrients for proper root development of young or small plants.

When heat is generating in the soil then it is with the result that the soil gets burn, and it gets loose its nitrogenous material, phosphoric acid, organic matter but the red soil is rich in iron obviously less leached than late rite soils. They are sandier and less clayey soils.